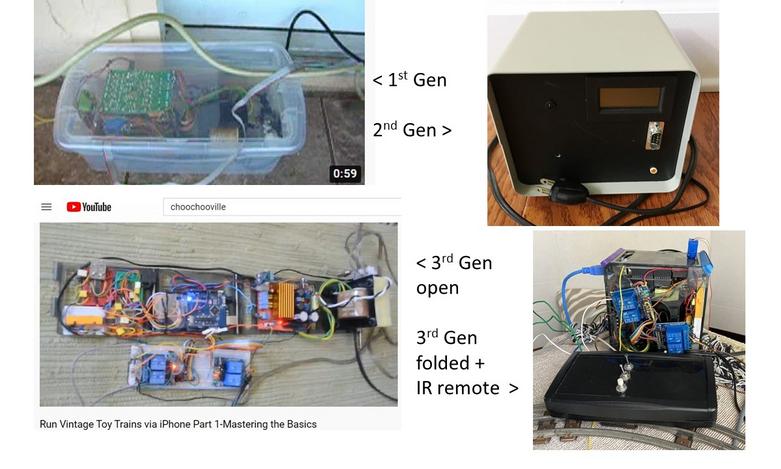 Fix My Train Copies of Articles

The internal details of both Lionel and American Flyer trains made in the late 1930's are nearly identical to what is shown in the copies of these documents.

Many of you who have followed our video series on the ChooChooVille YouTube Channel have asked about details of our layout automation efforts. There is no short answer, as much of it has been developed on and off over the past 10 years and with ever-increasing hardware and software capability. ChooChooVille is a husband-and-wife team that has grown up with Lionel Model Trains from the 1950’s and have also collected O Gauge and Standard Gauge Trains made before World War II.

Vintage Lionel (and American Flyer) Trains present several unique challenges for anyone wishing to control them remotely or to automate a layout.  Here are some of the challenges we have discovered over the years:

·       The layout requires between 6 Volts and 20 Volts AC (60 Hz) and up to 5 Amps of Current for large Standard Gauge Locomotives (i.e., the Lionel 392E pulling cars).  Electric Switches also take large amounts of Current, but for a short time. All this means that much of the core layout must be constructed using heavy gauge wire, perhaps #20 AWG or heavier.

·       When using a Power Amplifier as a driving source instead of a Transformer, it became apparent that various light bulbs in accessories, engine headlights, and switches, etc. consumed a surprising amount of Current and needed a conversion to LED bulbs to prevent the Amplifier from overheating.

·       Vintage Locomotives generally will not “creep” easily. Some switching type Locomotives will run as slow as eight inches per second. Keep in mind that unloading a car at a Remote-Control Platform must be done with a precision of one inch.

·       If the train is to be reversed, the power source must be interrupted twice (once to stop and another to move in the opposite direction). Only our most recent Video shows the process of reversing the train. At times, the old engine might not stop or reverse, so this action must be monitored by the Control System.

·       Our Video created in December 2020 has the engine entering Train Sidings to couple to and uncouple from Freight Cars. The cars that are collected from the Siding are unloaded on a “Main Line” and then the empty cars are returned to their respective Sidings. To date, this was the most challenging automation task that we have undertaken, and it required that the layout design to be changed from the design that was originally envisioned.

·       The choice of which Locomotive to use varies with what operations are to be performed. Switcher Locomotives typically are geared to run slowly. Many Lionel Steam Locomotives have “Spur” Gearing and will stall at slow speeds. However, they will also run fast and pull several cars at one time. All the Locomotives will coast by varying degrees of distance when the power is interrupted. This gets back to why Platform Unloading is tricky.

·       If Electric Switches are part of the Layout, Derailment and resulting short circuits must be a consideration, as high-power transformers or other driving circuits can burn out delicate wiring components inside a Locomotive. Any layout should have current limiting to less than 10 Amperes.

·       If you want to sound the Whistle or Horn of a Lionel Locomotive, then your Controller must be able to introduce about 1 Volt DC in addition to the AC Voltage that is applied to the track. Lionel’s Transformers have an inbuilt DC Supply and multi-contact Switch to perform this task.

If you want to Build Your Own Controller, here are some points to consider:

·      The Controller should be able to produce at least 50 Watts @ 60 Hz, measured at the track. The system should be able to set Track Voltage between 6 and 20, with a resolution of ¼ Volt. Most engines we have tested have a somewhat narrow voltage band where they produce peak pulling power.

·       The Layout might include Sensors that will be activated by the weight of a passing Locomotive. These Sensors should be precise regarding the position at which they activate and should not have any bounce (repeated make/break). Our latest Layout also had a Lever Activated Switch mounted to each Siding Bumper, which was activated by contact with the rear platform of the Caboose. The Bumpers also had some extra foam cushioning added to absorb the significant impact of the moving train.

·       Our latest Controllers have six Appliance Relays, but more is always better. These Relays operate the automatic unloading cars, switches, uncoupling magnets, etc. Each switch requires two Relays, but switches may be operated in parallel with another switch.

·       The Controller should have a Current Limiting Feature to protect both itself and the layout equipment. A setting between 5 and 10 Amps is optimum.

·       Consider how you will Wire to your Sensors and Relay Outputs, as they will typically be numerous. We found that connectors and wiring used for home telephones (4 Conductors) is readily available and inexpensive. Long lengths are easy to find, as are various adaptors. Note that these are probably not suited for carrying more than 1 Amp due to the thin wire gauge.

·       When you Build Your Own Controller, you will probably require some type of Computer Module that contains input/output Terminals, along with a means to control the variable voltage for the track and accessories. The marketplace has numerous such offerings, and prices and features vary significantly. The Computer Module should be capable of rapid sensing and fast output changes, as 1/10’s of a second delay in response time to a sensed position can result in a failed unloading routine.

·       Consider how you will control your various routines. Serial Communication to a PC using RS-232C is always a good choice, as you can have the PC report on the progress of the train’s operations. Other Control alternatives are IR (infrared; the technology used with television receivers) and even Cell Phones, as implemented in some of our later designs. Starting a routine operation with a push-button connected to an Input Line is another possibility.

·       Last, consider the Programming Language to be used with your Computer Module. The best languages to implement are those with compilers, which ultimately turn your code in the fast-executing binary code native to the internal microprocessor. One of the most common languages for small systems is C, or its newer variant C++, which is used in our latest systems.

Over the 10 years we have been developing Train Control Modules, we have progressed from using a computer running compiled Basic to a computer running C/C++ (Arduino). The first prototype with Basic was only capable of performing simple tasks before becoming memory limited. The first Arduino protype used two UNO Microcomputer Modules, while the latest generation used the Arduino Mega 2560, with much more memory and I/O. The three evolutionary variants are shown in the composite photo at the end of this section. Note the differences in packaging, with the second-Generation version being housed in a functional compact aluminum housing. An IR Controller that we developed early-on is shown alongside the third-Generation device.

If all this sounds like something you would like to investigate further, then you might consider purchasing our book entitled: “Antique Lionel Trains on Autopilot".  The book is available from Amazon in either paper cover or downloadable electronic version. It takes you through the development of the first two generations of the train controller, including schematics and flow diagrams of the computer code.